The Cycling in Bochum is just as popular here as it is in the rest of Germany. There are cycling routes near Lake Kemnade and mountain bike clubs. But the main cycling event is surely the Sparkassen Giro, an annual road race held each year in August. It is widely considered one of the top races of the world cup. This one-day event is a great way to experience the German love of cycling, whether from the seat of a bike or from behind the lines as a spectator.

Bochum can be conveniently explored by bicycle. You can also go on nice bike rides throughout the Ruhr Area to get to know the surroundings. There is a network of nice cycle tracks around Bochum and cycling in the city itself is a treat thanks to the integration of cycle tracks into the public transport system. You can easily reach Ruhr-Universität Bochum by bicycle, find your way around the campus using the campus map for cyclists or simply explore the area around it.

If you are going to be staying in Bochum for a longer period of time you can consider buying a new or used bicycle. Various possibilities exist in town. You can decide whether you would like to purchase a used, refurbished or new bicycle. There is a bicycle workshop, some flea markets, classified ads, sports shops, online stores or online auction platforms to choose from. Bochum and the Ruhr Area offer an extensive network of cycle tracks. Often you can see the highlights of industrial culture along the way so sightseeing is also made possible on two wheels.

Metropolradruhr is the public bike sharing system in the Ruhr. As practical addition to busses and trains our bikes can be rented and returned in all cities within the system of metropolradruhr. Simply start your journey for example in Bochum and return your bike in Duisburg.
Read More 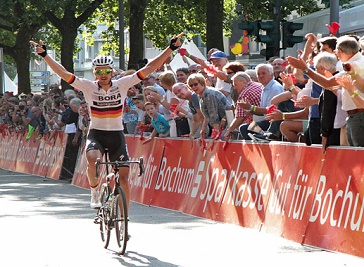